"Before" At The Beach Part Two!

Last week I posted the "before" pictures of the common areas at our little beach cottage.
Now I want to show you each of the three bedrooms and the two bathrooms--how they look before any work is done.

There will be two master bedrooms--each with an adjoining bathroom.  There is one other very small bedroom that we plan to turn into a bunk room.

The front bedroom is off the living room (living room is through door on left) and is fairly large for a vintage Tybee cottage. 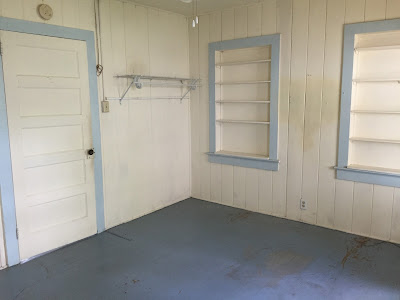 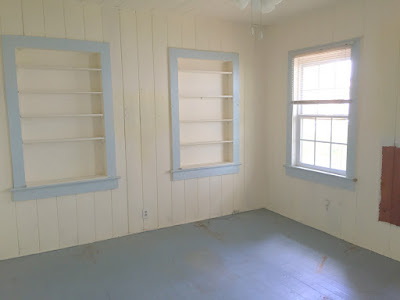 You can see what the paneling used to look like before the previous owner painted. Wonder how they missed that spot? 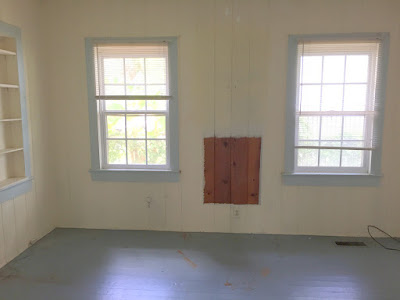 The door in next photo leads to the bathroom. 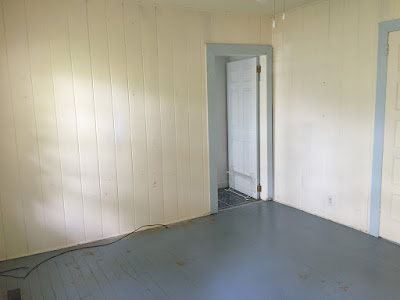 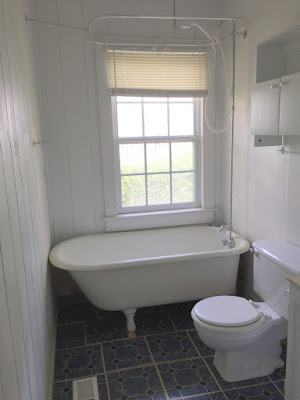 The bathroom is long and skinny. Part of it was closed off by the previous owner to make a closet for the bedroom next door. 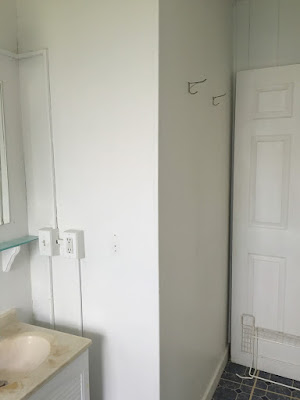 This room is off the kitchen in the middle of the house. The door leads out to the kitchen. 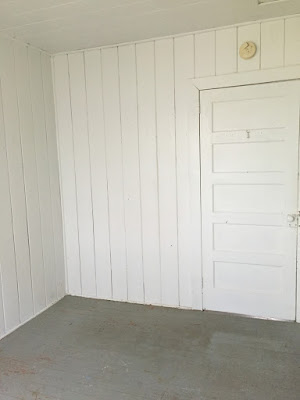 Here is the closet that goes into the front bath. 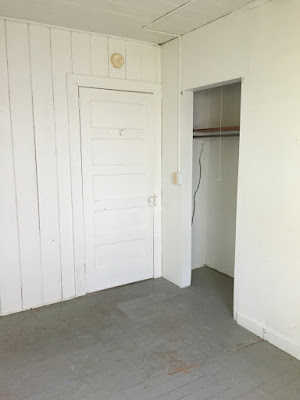 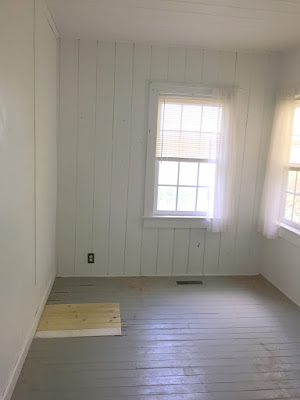 It will be a challenge to make the most of this cozy space so that its occupants have a relaxing space with some storage for their belongings.

This bedroom is more compact but it has wonderful windows! 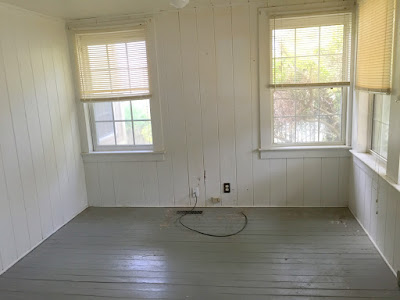 Tybee cottages are known to be a little funky.  There is a water heater and a makeshift closet on this wall. The door leads to the backyard. 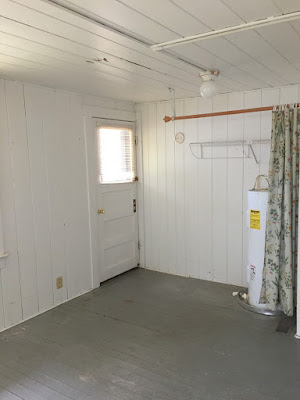 This long, skinny bathroom does not currently connect to the next-door back master bedroom. We are hoping to find a way to connect them. Talk about funky--check this out! 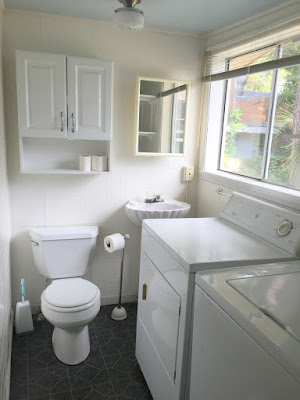 I guess they built the room around the appliances because there is no way the washer and dryer fit through the door! And check this out--only about 18 inches between the sink and the dryer. Not much room to stand... 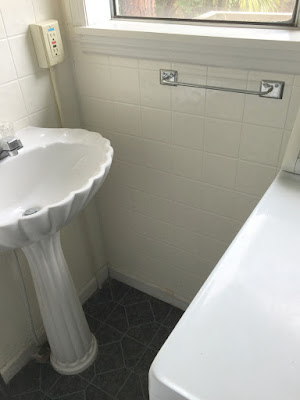 Looking back in the other direction... 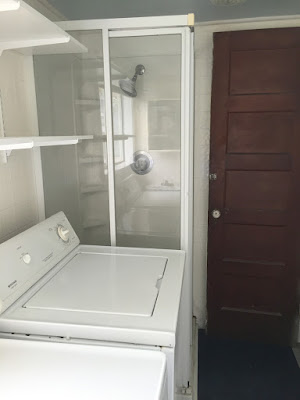 So that is a "Before" tour of the bedrooms and bathrooms at our little beach cottage. We've doing a lot of thinking and planning and now it is time to roll up our sleeves and get started!

I hope you'll join us on the journey!

Have you ever thought it would be fun to renovate a beach cottage? It is! It is so satisfying to see a cottage that is past its prime given a new lease on life. It's also very challenging to do it on a budget.

Let me show you our new little old cottage at Tybee Island. 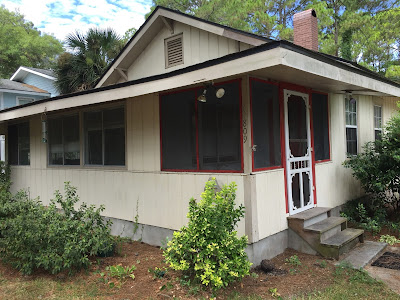 Let's do a pretend walk-through so you can see the "Before" pictures. Then we can begin to get a feel for the cottage and begin imagining what we might want to do. Come on in! 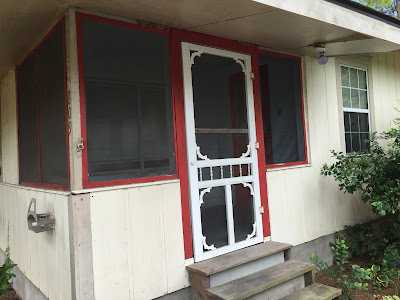 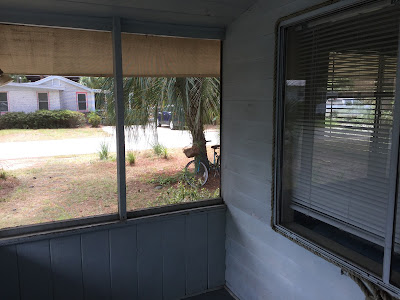 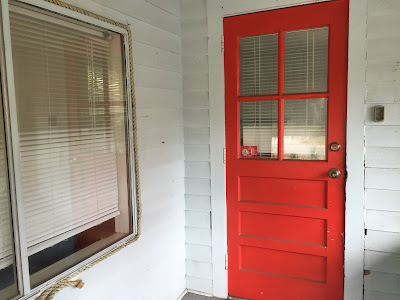 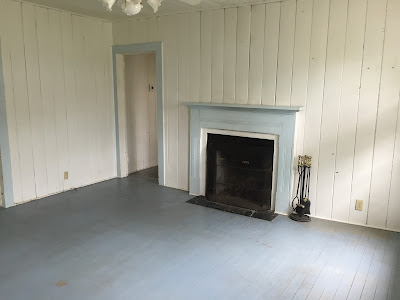 Foggy Photos Not To Be Mist--Ha!

I have been at Tybee for a couple of days checking on the house. Today I needed to drive into Savannah to do some errands and I was amazed at what I saw--and at what I could not see!  There was a dense fog over the river and marsh along Highway 80! 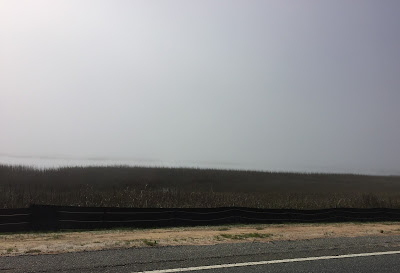 Typically I enjoy the expansive view of the Bull River snaking through the marsh but instead today this... 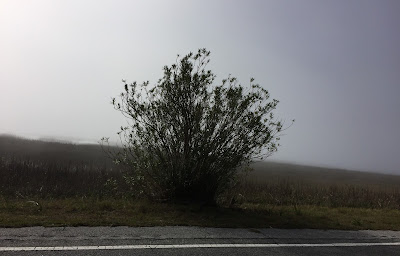 Eventually the sun burned it away. I wonder if having fog could have anything to do with a high temperature of 73 degrees in January? It has been so mild this week! I love Tybee Island in the off-season!
Posted by Vicky at 11:42 PM No comments:

Email ThisBlogThis!Share to TwitterShare to FacebookShare to Pinterest
Labels: Tybee

My last post was July 31st! We had just closed on our new little old Tybee Island cottage. 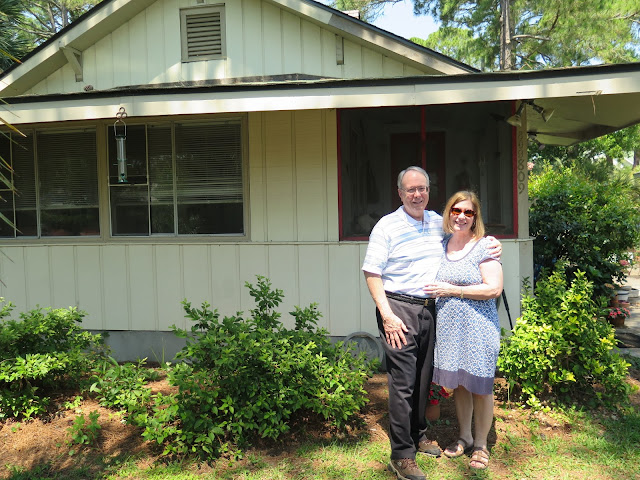 I knew I would need to wait a few weeks for my contracting company, Catskill Builders, to finish up their other projects and begin mine but that was okay. It's worth the wait to have people you have confidence in working on your renovation--especially when you
live in a different town.

Finally, in late September my turn was drawing near to begin the work and I was eager to get started. I hoped to get the heavier work done before Christmas. At the same time a tropical storm named  Matthew was being followed with interest by the weather forecasters.  Then it turned into Hurricane Matthew, a category 5 storm in the eastern Caribbean. It impacted Haiti, Cuba and the Bahamas before it took aim for the southeastern United States.

When and where would it make landfall? Would it go to the Gulf coast or come up the eastern shore? Will my house make it through? Such are the nail-biter questions owners of coastal properties ask.

Matthew came very close to the eastern coast of Florida and hugged the coastline as it made its way up to Georgia. It reached our little beach town of Tybee Island in the early morning of September 8th. The island was pummeled with high winds and a record-setting storm surge! Henry and I wondered if there would be a cottage left to renovate
when the storm ended.

The mayor had ordered a mandatory evacuation of Tybee Island before the storm came but there were some "hurricane holdouts" who sheltered in place and thanks to them posting videos on Facebook we were able to see that our cottages, including the one awaiting restoration, had survived!

A couple weeks later after the flooding had subsided and the utility crews had made things safe and restored services, I went for a firsthand look with my sister Crystal who was visiting me. 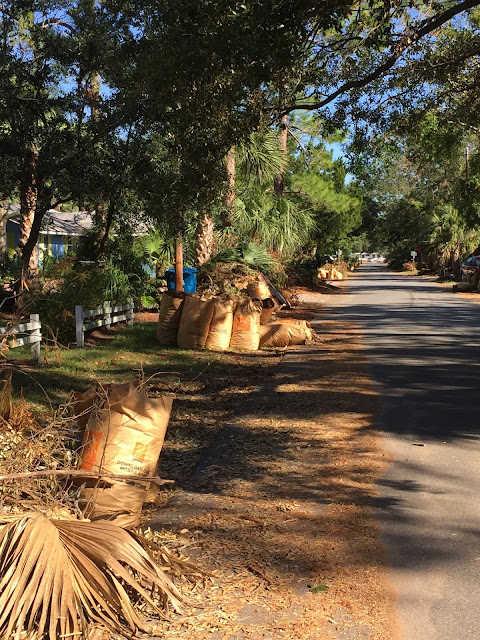 Full-time residents had been at work clearing debris from the yards and there were huge piles of yard trash, stacked logs from fallen trees, and in some cases, furniture which had been soaked and was no longer desirable. 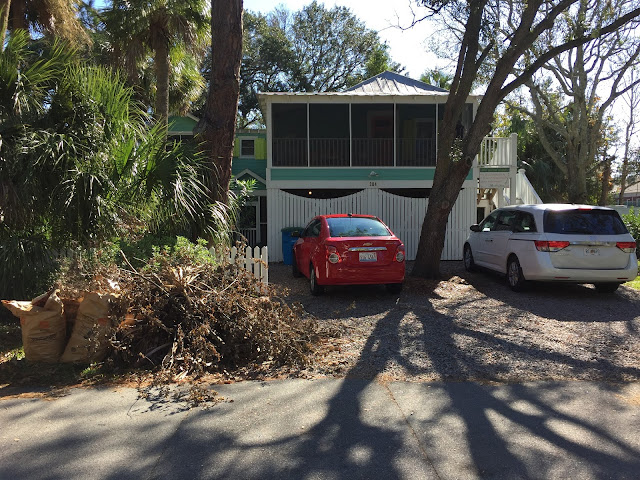 Our completed cottage, Doc Holiday, is a raised cottage and did not suffer any lasting impact even though the lot was flooded several inches. 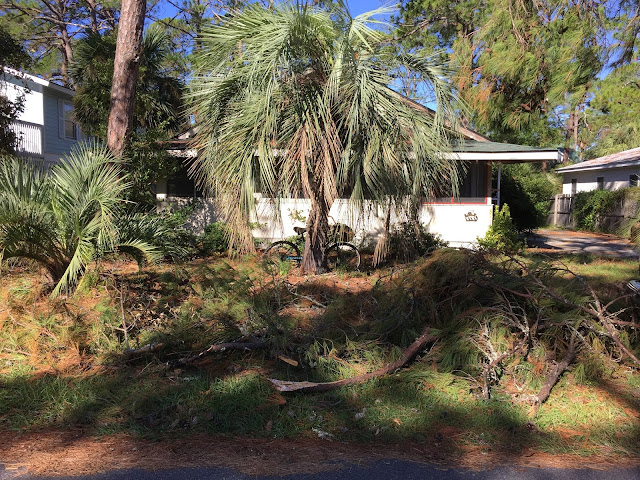 Our "new-to-us" cottage came through with flying colors! It had lots of fallen tree limbs and... 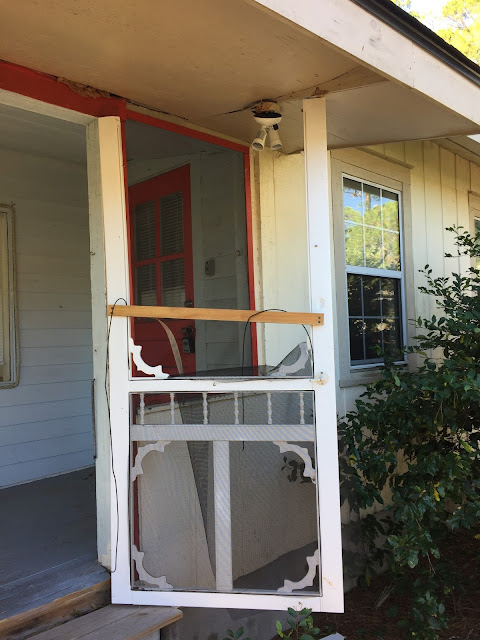 It also had one very beaten up screen door from the high winds. But I'm so grateful that that was the extent of the damage!

As you can imagine, the need for carpenters, electricians and other skilled workmen has been huge since the storm and I needed to go to the back of the line while they worked on homes that were people's primary residences. Our contractor, Anthony, was helping others and dealing with flooding as well as a missing dock and boat at his own riverside home. How could I complain when I was merely inconvenienced because my timetable
had been interrupted?

Well...I'm happy to say that my turn has come back around and I am very excited to get down to business! Can't wait to share it all with you!
Posted by Vicky at 5:36 PM No comments: