Putting on the Finishing Touches!

It's time to put the finishing touches on the yard at the Coral Cottage!

Bill Griffin of Griffin Landscape Design and Contracting and his crew worked hard to install our sprinkler system, plants and turf quickly and get the Coral Cottage ready for her debut at the Jane Coslick Holiday Tour of Homes back in December.

The team of three installers worked so efficiently and expertly!  Here is Bill with his crew members, Tyrone and Bryan, getting the rock in the tire track style driveway. 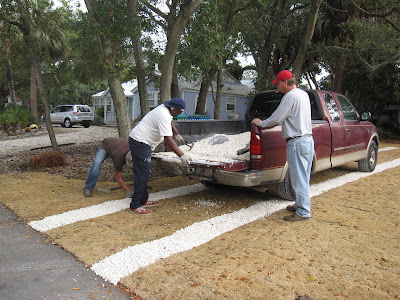 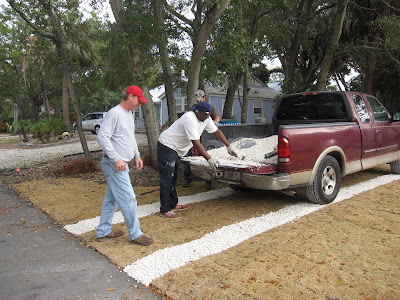 Now if I had been in charge of this project, there would have been more rock in the middle than in the tire tracks area.  When they were done, it was perfect!

Meanwhile Luis was working to put down the stepping stones.  The ones in the turf were placed on the grass and then Luis cut around them and lifted the turf out of the way before placing them into the grass--perfect fit every time!

Next time I will do the reveal of the landscaping job--it looks so fabulous!  Come back for the grand finale!
Posted by Vicky at 7:00 AM